The flame of the oil burner interacts with sound waves - oscillations of the pressure of the air which you are hearing right now. Shapes of the fire copy shapes of the acoustical wave. This is how the sound might look like if we could see its spreading in the air. The effect is more prominent in the low frequencies area in the range of ~ 16-300 Hz. Also you could notice beats – appearing of the low frequency because of the summing of two other frequencies which are very close to each other and amplitude modulation, when the amplitude of the carrier frequency is changing in relation with the modulation frequency. Shooting was made with 25 frames per second and very fast shutter speed - 1 ms with DSLR camera and macro lens. Since each frame was exposed for a very short time – 1 ms – it was possible to capture clear image of the oscillations. Green color of the flame is the consequence of adding copper or something else to the oil of the burner. In such flame oscillations are more clear. Flame revealed its grace and plasticity which makes me think what if it could be possible to control flame with the sound. Sound is made in a programming language Pure Data using harmonic oscillations (sine waves) and its modulations in the frequency range, which is more effective in this experiment.

Yulia Glukhova (b. 1989) is a sound artist and sound designer based in Moscow. She graduated from the Moscow Film School (VGIK) Sound Department in 2012. Since that time she has been working as a freelance sound designer, making sound for several media projects as well as her personal experimental sound art projects. She participated in several international workshops. In 2014 she won a prize at the Berlinale Talents for the best sound design for the Dolby Atmos Policy Trailer. Since 2015 she started exploration of wildlife sound and extended field recording techniques by making sound design for nature documentaries and doing sound art projects based on field recordings. In 2016 she was taking part in the co-production exhibition of Ars Electronica and Polytechnic Museum in Moscow "Earth Lab" with the project “Plasticity of flame”. In 2018 she has been taking part in a “Confirm humanity” exhibition with audio-visual work which was a generative movie, where each next cut was triggered by spectators blinking where sound and image were equally undetermined and combined into random combinations. In 2019 she received Phonurgia Nova Awards in the Field Recording category. In 2021 she has been giving a workshop “Unthinking / Unlearning. New sonic theories and praxis” about new practices in perception of field recording in co-production with UDK Berlin and HSE Art and Design School. In 2021 has been teaching 2-month course about field recording at MA Sound Art and Sound Studies at HSE Art and Design School. Currently working as a sound supervisor at the Arzamas podcast studio. 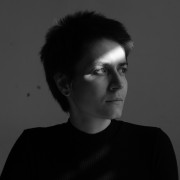