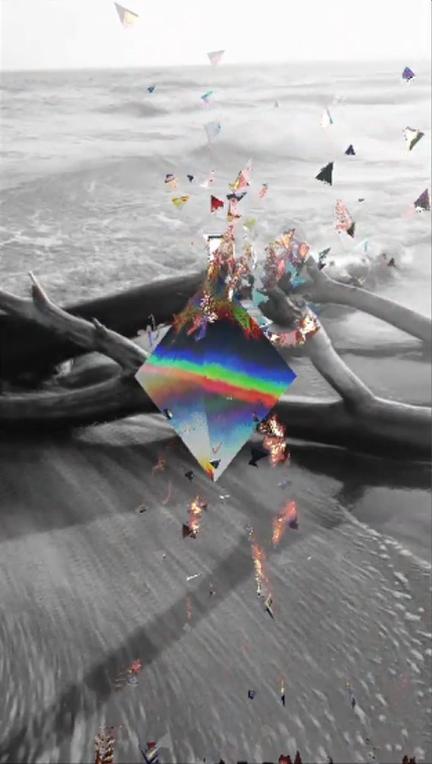 Poietic, from ancient Greek ποιητικός "the spiritual activity in which something is created that did not exist before”. - Tetrapoiético investigates the relationship between material and virtual by addressing the issue of global warming from a mystical perspective. Symbolically, the VR filter evokes a figure of a tetrahedron, formed by triangles that represent according to the alchemical vocabulary the element of fire when facing upwards and the element of water when facing downwards. The base on which the triangles originate is a square that symbolizes the material plane, the reality in which we live. The current climate crisis situation is distilled into the way in which matter and energy interact on a virtual plane. The apex of the tetrahedron is on fire but there seems to be no reaction on the structure, until we observe the bottom where the consequences are catalyzed and the matter melts until it drips downwards. The filter manifests itself as a celestial apparition, a cherub who has come to communicate from a virtual dimension. The music synchronized with the dripping water, is the background to a robotic communication that comes from the tetrahedron. The metallic sound immediately turns into poetry, like an awkward attempt to make peace on a human level with the emotional jolt provoked by the warning it brings.

MEDIACOELI is an aesthetic research duo based between Venice and Madrid, formed by Luca Cacini and Letizia Artioli. Investigating the intersection between virtual reality, symbolism and environmentalism operating within the language of contemporary digital art, creating AR hybrid visions in the emptiness of the multiverse. Previous exhibitions include the Ars Electronica Garden / XR Ensemble NYC 2021 and Venice Climate Change Pavilion, a digital experimental diffused pavilion about climate change data during the current Venice Architecture Biennale. 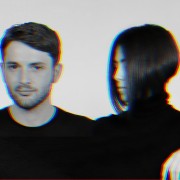